"A carrier-based multi-role fighter. The standard aircraft of the enemy naval force. Capable of equipping a myriad of air-to air and air-to-ground weapons." -- Mission Editor description[]

The ASF-30 is a single-engine Air Superiority Fighter serving as the standard fighter of the enemy fleet. It is known for its balanced configuration and versatility, being able to act as both a fighter and a striker depending on its configuration. Like its relative, the ASF-33, the ASF-30 is capable of both taking off from and landing at carriers. It has a built-in radar for tracking and targeting hostile aircraft and is identifiable on the Radar Warning Receiver (RWR) as F.

The weapons that can be equipped on the ASF-30, as listed in the Mission Editor. 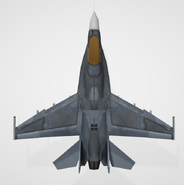