The ASF-58 is a dual-thruster afterburning engine Air Superiority Fighter, reputable as being the most powerful class of Air Superiority Fighter in the enemy fleet. It is designed with stealth and air superiority in mind. It has a very smooth frame and an internal weapons bay, giving it a strong resistance to radar detection and locks. This plane has a default Thrust to Weight Ratio of 1.43, the highest of any fighter in the game. It is also optionally capable of equipping External Fuel Tanks, allowing it to sacrifice its stealth and maneuverability for extended flight range. Unlike the other ASF models, the ASF-58 lacks catapult connectors or arrestor hooks, making it unable to safely deploy from or land at carriers.

All of the ASF-58's weapons are internally-stowed, similarly to the F-45A. It is identifiable on the Radar Warning Receiver (RWR) as F+.

*Not equipped by default; can be attached if desired. 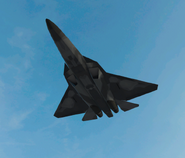 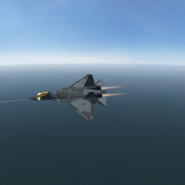 An ASF-58 firing its dual cannons.