This page is a stub.

This page is very short and could benefit from the addition of further information.

Akutan is a default map available in VTOL VR. It consists of a large island with a single airbase, multiple cities, and a smaller island to the southwest. This map was designed well before the Map Editor was implemented in the game; as such, it not only contains uniquely-modeled features, such as its custom airbase and city buildings but also cannot be accessed for modification through the Map Editor program. It can, although, still be utilized within the Mission Editor. It is most widely known for being the map where the AV-42C's campaign, The Island, takes place.

Being VTOL VR's default map, it completely bypasses the map generation phase that other map files require for in-game usage. This makes it an incredibly useful map for naval combat; simply move your units out far away from the island for a blank area for sea combat. 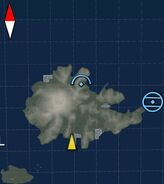 Akutan as viewed from the GPS