The GAV-25 Bullshark is the main VTOL aircraft for the enemy faction in the game. This unit specializes in Air-to-Ground combat; its sheer potential firepower makes it a formidable asset in Close Air Support tactics. It has no radar, falls short in terms of speed, and is only capable of equipping heat-seeking missiles, making it somewhat vulnerable to hostile interceptor aircraft.

These are the weapons the GAV-25 can equip, as listed in the Mission Editor.

A GAV-25 firing a GMA-6 at a distant ground target. 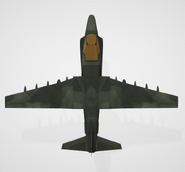